Share a memory
Obituary & Services
Tribute Wall
Read more about the life story of Josephine and share your memory.

Josephine Louise Martin Mayne was a beloved member of the church and the community. In her lifetime she was also a business owner with her husband Edward F. Mayne, Sr., who passed away on May 14, 2014. She was born in Olney at her family home and was delivered by her dear Aunt Katie on June 6, 1931. Josephine was the youngest child of seven that was born to Barbara and Oscar Martin, who were business owners of Martin's Dairy. She was preceded in death by her siblings: Clifton, Calvin, David, William, Barbara and Katherine. Her mother called her Josephine and father called her Joey. Everyone else called her Jo Ann. Later in life, she asked to be called Josie.

She graduated from Sherwood High School in 1949 and later married Edward F. Mayne, Sr. on June 21, 1951. They loved each other deeply and were married for 62 years. Mrs. Mayne attended Oakdale Church for over 91 years. For many years she served faithfully in the Stephen Ministry and made countless hospital or home visits to people in the community. She also taught Sunday school kindergarten, served for many years on the Oakdale mission board, and was active in the Might Oaks and Prayer ministry.

Mrs. Mayne also served in her community. She was active for many years with the Montgomery County Farm Bureau and Laytonsville Lions Club. She volunteered often with the community blood drive, mobile vision screening van and delivery of Thanksgiving baskets to families. She was a lifelong member of the Montgomery County Agricultural Fair and for many years organized and dipped ice cream at the dairy bar at the county fair. Mrs. Mayne was also active with the King Barn Dairy Mooseum and served on the board. Mr. and Mrs. Mayne always opened their farm to the Montgomery County Youth for Christ for summer club meetings and Easter Sunrise services that were held at their farm pond.

Family and friends may visit on Sunday, January 15, 2023, from 2pm - 5pm at the Roy W. Barber Funeral Home, 21525 Laytonsville Rd., Laytonsville, MD 20882 and on Monday, January 16, 2023, at 11am at Oakdale Church, 3425 Emory Church Road, Olney, MD 20832, where funeral services will be held. A graveside service will be held at a later date at Arlington National Cemetery where Josie's ashes will be joined with her husband Ed. In lieu of flowers, the family has requested gifts to be sent to Oakdale Church Attn: Missions.

To send flowers to the family or plant a tree in memory of Josephine Louise (Martin) Mayne, please visit our floral store. 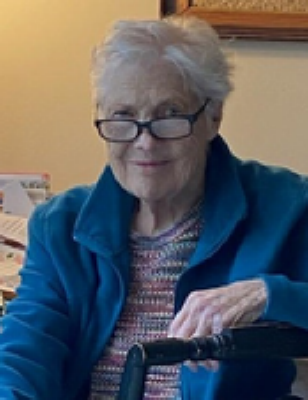